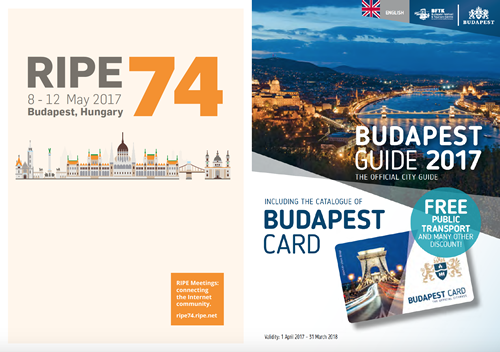 First time in Budapest? The BudapestTourist Bureau has put together a useful guidebook to help you make the most of your time in Budapest outside of the meeting. In this guide, you’ll find practical information, restaurant and pub recommendations and the best sightseeing destinations. (PDF 23.6MB)

My top 12 favourite places in my hometown by Ferenc Csorba, RIPE NCC

Enjoy an amazing view of the city from above: from the top of the Gellért Hill, next to the Danube. Get the best view from a terrace near to the gigantic Liberation statue (woman raising a palm tree branch) next to the Citadel.
You can either walk across the green Szabadság bridge, then keep walking straight up the hill, passing on the right side of the Gellért hotel and baths, up to the statue…
Or, if you are lazy: from Ferenciek tere metro station you can take bus 8 to the final stop called Sánc utca, on the hill, and then walk a few metres up to the statue.

The old royal castle, fortress and medieval town of Buda is located on the Castle Hill next to the Danube. It used to be the old royal capital.
To get there, walk across the Chain bridge (Lánchíd, next to the hotel). At the Buda side you can take the funicular for the short climb up to the castle.
Once at the top you see the Royal Palace on your left, the President’s residence on the right, and the medieval walled city of Buda is further to the right: it is just a few streets behind high walls.

This is a huge 19th century covered market hall. Here you’ll find lots of stalls selling all the typical local produce.
Upstairs in the galleries you can find cheap buffet restaurants with (often slightly greasy) local food. There are also lots of souvenir stalls.
Address: Vámház körút 1-3.
Metro stop: Vámház körút.
Find it next to the Danube.

This is one of the liveliest areas in the city. Many buildings are run down and in need of repair but still fascinating and beautiful. There are lots of trendy cafés, restaurants bars here.
The quarter’s main street is Király utca, starting from Deák Square, near the Intercontinental hotel. The area between Király utca and Dohány utca is the Old Jewish quarter. The Gozsdu udvar (Király utca 13) is a labyrinth of seven courtyards with bars, restaurants, cafés, outdoor terraces and small shops. It gets vey lively in the evenings.
The impressive “neo-moorish” synagogue in Dohány utca 2 is the largest synagogue in Europe.

This is a pleasant excursion in the wooded hills of Buda using quaint modes of transport: the Cogwheel Railway, Children’s Railway or the chair-lift.

This is the largest island in the Danube and in the centre is one big park. The entrance is from the middle of Margareth Bridge (Margit híd). Take trams 4 and 6 to go there.

This is one of many ‘Ruin Café’s’ in Budapest. Like the others, this is more a bar/pub than a café. It is popular and trendy and very busy, located in a dilapidated building, occupying many rooms and courtyards: look out for bars, pool tables and garden cinemas. It’s fun, and a great place for meeting people.
Kazinczy utca 14 is a short walk from Deák metro station, or from Astoria metro station.

This is an over-the-top, lavish café from the late 19th century: all marble and gold and statues and red velvet. It advertises itself as the “most beautiful café in the world”. That’s for you to judge.
It used to be the meeting place, home-away-from-home, workplace of the great writers and poets of the 19th and early 20th century. If you ordered a coffee the waiters would bring you papers and a pen so that you could start writing your masterpiece.
When the café first opened its doors 1894, the famous writer Ferenc Molnár led a procession of writers and poets to the Danube, carrying the key of door, and threw it into the river, so that the café may always keep its doors open for poets and writers.

This is the oldest metro line on the European continent, dating from 1896, and is the second oldest in the world after London’s tube system. Originally, the carriages were drawn by horses. The stations keep the original 19th century architecture and
interiors. Take the metro from Vörösmarty tér metro station, next to the Intercontinental hotel.

Budapest has many thermal baths and has had a famous bathing culture since the Roman and Turkish times. Often the hot thermal waters contain sulphur, giving them a slight smell of rotten eggs.

Check out Gellért baths: art nouveau baths from the turn of the 19th and 20th centuries. They are all marble and blue enamel. Aside from the swimming pools, there are also steam baths separated into male and female sections.

The Rudas bath was built by the Turks in the 16th century. Below the Gellért Hill by the riverside.

The Széchenyi bath is a huge bath built in 1903. It looks like a palace with large swimming pools instead of an inner courtyard. The baths feature underwater currents and jets. According to the website: “…one of the best and largest spa baths in Europe with its 15 indoor baths and 3 grand outdoor pools”. Take metro line 1 to Széchényi Fürdõ station.

Take a stroll down Andrássy út, the most monumental and magnificent boulevard from the late 19th century. Metro line 1 runs under the entire length of the street.

If you get the chance, why not take the tram along Kiskörút, the small ring road around the old inner city. You can take tram 47 or 49 from Deák tér, near the meeting venue. They take you all around the old city up to the Danube.

There’s also lots to see on Nagykörút, the greater ring road. You can take tram 4 or 6, which runs along the entire semi-circular road, from Danube to Danube. These tramlines have the longest tram carriages in the world and run the most frequently: every 3-4 minutes.